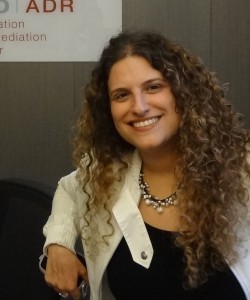 Gabriela is an attorney, having graduated with honors from the University of Buenos Aires, and Prejudicial Mediator (Ministry of Justice) with experience in Cyberlaw and New Technologies, Intellectual Property, Commercial, Civil and International Law, with expertise in Internet and the Digital Economy.

Co-founder of Rosz Lawfirm, Gabriela is the director of the New Technologies and Law department and represents clients before negotiations and litigations. She is consistently consulted for many legal and strategic aspects of business and online activity – everything from commerce and electronic business, web developments, intellectual property, domain names and Internet policy.

Gabriela is co-founder at Pactanda, a start-up offering Online Dispute Resolution services in Latin America. She also serves as Regional Director at the Latin American eCommerce Institute (eInstitute) for initiatives like eResolución (ODR) and eGobernanza.

As a consultant for Mercosur Digital, Gabriela has worked with issues of cross-border E-commerce. She has been an online professor at the Mercosur Digital School and has served as a legal adviser to the Ministry of Justice. Gabriela has also coordinated and contributed to Academic Research Projects for NGOs on varying issues of International Relations and Human Rights. She has been a university professor at UBA’s School of Law in two areas: International Public Law (2002-2004) and Human Rights (2008), where she also worked and contributed to published scholarly works (Ed. Act 2003, Ed. Eudeba 2008) and online tutoring in various subjects.

In addition Gabriela is an author of the chapter “Online Resolution Dispute in Latin America, Challenges and Opportunities”, for the book Online Dispute Resolution: Theory and Practice and a Treaty on Technology and Dispute Resolution, published by Eleven International Publishing in 2012 and awarded Book of the Year by the CPR organization of New York.

Become a member of